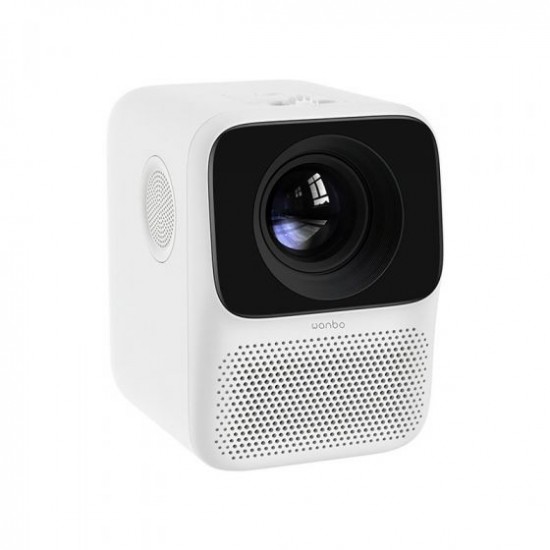 Wanbo T2 Max Mini Portable Projector WIFI Android System 200ANSI features LCD technology and native Full HD 1080p resolution and 150 ANSI Lumens brightness. The focus is manual, the vertical trapezoid correction is automatic, and we can get a screen with recommended dimensions between 40″ and 120″ placing it between 1.5 and 3 m. About your SoC, we only know that it is a Mstar and includes support for HDR10, 1 GB RAM, 16 GB storage memory, Wi-Fi b/g/n, and Bluetooth 4.0.

This projector despite its size integrates two 3W speakers and this time we do not see control keys on its small box, so we can only control it through the remote control.

The manufacturer calls the Xiaomi Wanbo T2 portable, but I would not call it that. Since the device does not have a built-in battery but is powered by a power adapter. Of course, it is much easier to move it from room to room due to its small dimensions – 150 x 140 x 110 mm. And the weight was about 900 grams. It is really very small and at first glance, it seems childish, but the black and white combination does not make it so. The whole body is assembled very well from solid white plastic. During the test, I did not see any squeaks or other sounds. The matte white plastic is very practical and durable to the environment, even in the hands of children. There is an LED lens on the front of the projector and there are many holes through which warm air can escape. A small minus can be attributed to the design solution, the location of the lens itself is slightly at an angle to the projection screen. Then you need to use keystone correction. But it’s good that the kit includes a tripod, where you can set the angle directly to the projection screen. The side ends on the right and left sides received one speaker with a power of 3 W. Of course, it is better to use higher quality external speakers, but if there are none, then they do not play so badly. Even a little distant bass is heard, although very weak. The focus adjustment ring is located on the top and I had no problems with its work. There is also an on and off button nearby. There are no other control buttons on the projector body. The backside of the device has a DC port for power, USB 2.0 for reading a flash drive, a standard HDMI port, and an AV output. Below there are holes through which cold air enters. The bottom of the projector features a sticker with some technical details, four non-slip feet, and a tripod or tripod hole. The remote control is designed in a typical style, like most products from Xiaomi. It is made in black and has a minimum number of buttons. But their number is sufficient for full use. In addition, I had no issues with responsiveness, and each command was executed accurately and quickly. The remote control is powered by two AAA batteries which is not included.

What is the price of Wanbo T2 Max Smart Portable Projector (150 ANSI Lumens) in Bangladesh?